Any mother closely monitors the health of her baby. Every day, since birth, she carefully performs the hygienic procedures and thoroughly examines each fold on her baby’s body. Having found the discharge in newborn girls, many women begin to panic. In this article, we will find out what this phenomenon mean and in which cases measures should be taken. Discharge in the newborn girls: is there a reason to be worried?

Hormonal crisis of the newborn

In the process of prenatal development, baby girl goes through all the stages of hormonal readjustment with her mother and receives sex hormones in high concentration.

Prior to delivery, the level of these substances is especially high, and after the birth it gradually returns to normal. This process is called sexual or hormonal crisis. Its manifestations can be observed both in girls and in boys. They have the form of acne, breast swelling, and in some cases, one can note the substance, similar to colostrum.

Often, in the first month nursing babies suffer from the swelling of the genitals, accompanied by certain secretion. It is also a consequence of release of sex hormones (estrogens). It can be bloody, liquid white, yellow or green or mucous. In most cases, this is a norm, but there are exceptions.

Signs of hormonal crisis can be felt from 1–2 days to several months, and its peak falls on the 6–7 day after the birth. Mainly, complete cleaning from the oversupply of hormones ends on the fifth week.

Follow the link to find out what the white, yellow and green discharge in the girl aged 4-5 indicate.

Vaginal bleeding in the newborns

According to statistics, 9% of newborns have discharge. This phenomenon is called “metrorragia of the newborns”. Sexual organs of the baby: surface of the uterus, its surface and vaginal mucosa are similar to the organs of the women of reproductive age before menstruation.

Estrogen received from the mother stops acting. Therefore, the mucous layer of uterus is rejected. Spotting in newborn girl can be pink, scarlet, brown or beige. Secretion appears a few days after the birth and disappears after 2–3 days.

In this situation, there is no reason to be worried. The main thing is to maintain a hygiene of the newborn and make sure that such processes don’t last too long.

Often, the urine of a nursing child under one month has red, orange or brick shade. The cause of this symptom is uric acid infarct (or crisis) — this is a natural phenomenon in newborns, explained by the release of an organism from accumulation of urate salts. As the mother’s milk is coming in, the color of urine will get back to normal. In this case, you don’t have to worry.

White discharge in newborn girls is related to the following reasons:

Pathological discharge in the girls under one

In 90% of cases, vaginal discharge in the girls under one year of age is a norm, as this period is characterized by regular hormonal fluctuations. But sometimes, this sign indicates a pathology.

You should be suspicious if:

These phenomena can be caused by physiological problems, but most often they result from the improper intimate hygiene.

Hygiene of the newborn girl

During bathing, you should clean the crotch, and only then — anus, i.e. the direction of movement is from the front to the rear. Otherwise, fecal masses or opportunistic bacteria from the anus can get into the sexual organs and cause the development of infectious or inflammatory process. During the first month of life, you should bathe a nursing baby as often as possible.

Testimonials of women and opinion of specialists

Kitty, 26: “On the seventh day after the birth of my daughter, I found the bloody-pinkish discharge in her vagina. I was really scared, even though the baby didn’t cry and was calm. It was Saturday, so we waited till Monday to consult a doctor. However, by that time, the blood disappeared. What shall we do?”

Maria Alve, pediatrician: “In the first weeks of life, the newborns suffer from sexual crisis, related to the relief of baby’s body from the mothering hormones accumulated during the prenatal period. In girls, it is reflected in spotting from the vagina. It can be pink, brown and ichor. This problem goes away in 2–3 days, but sometimes lasts up to the second month. This is a natural process, no need to worry.”

Angeli, 35: “My daughter is 4 days old. When I started to examine her on the first day, I saw a white bloom on the labia. I tried to remove it with the wet wipes, but it didn’t work out. Maybe it was a thrush?”

Maria Alve, pediatrician: “In the first days of life, you can see the rests of original smear on a newborn’s body. They are especially noticeable on the baby’s head and in the folds on the body. In girls, they are accumulated in the area of labia and crotch. You shouldn’t remove them. The bloom will go away in a few days. However, if its amount increases, and the baby starts to make a fuss, there is reason to suspect some disorder and consult a doctor. In 95% of cases, this is a natural physiological process. ”

Both women of reproductive age and nursing babies (especially in the first weeks of life), have vaginal secretion. Bloody, pink or white secretion in newborn girls is a natural consequence of hormonal crisis. Discharge is characteristic for all babies, as the body needs to remove the excessive mothering hormones. It happens differently for every individual. In some cases, it is manifested in bloody discharge in the newborn girls. It is important to maintain baby’s hygiene and not to worry. 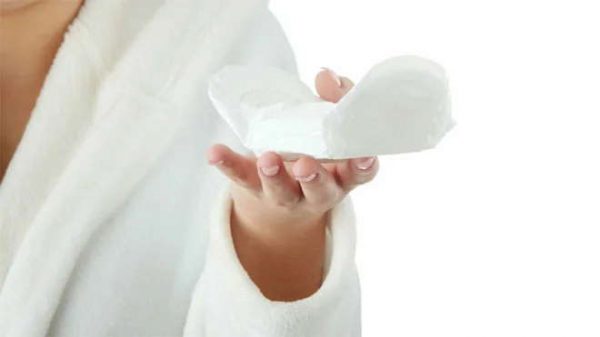 Discharge with a smell of ammonia: determine the cause