Bloody, brown and smearing discharge caused by the use of birth control pills 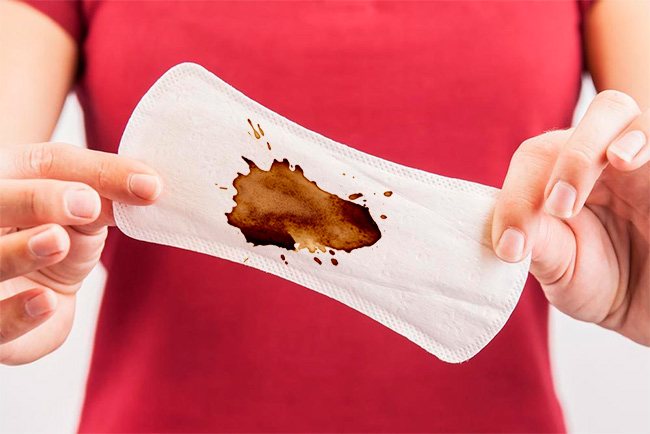 When the discharge must not cause concern?

Even if you use the contraceptive pills according to the instructions, menstruation doesn’t stop. It is still manifested every month, but its frequency becomes clear (exactly 28 days), and the intensity- moderate.

You can observe smear on any day of the cycle at the beginning of treatment with contraceptives, which indicates the reorganization of the body.

Natural acyclic bleeding must have the following characteristics:

Such phenomenon doesn’t require the cancellation of course or replacement of contraceptive. You just have to wait for the stabilization of reproductive system and adaption to the new conditions.

Protective (contraceptive) function of the drug doesn’t reduce, if a woman has an occasion bleeding. It is important to stick to the treatment scheme, without missing a day. In this case, such secretion will not be considered a side effect.

You can read about other causes of bloody discharge between periods in one of our articles.

How long can the spotting last?

In 40% of women, obvious bloody discharge can last for the first three months during the use of hormonal pills. This secretion is a consequence of contraceptive effect. Reproductive system needs this time to adapt to the changes in hormonal balance. And only 10% of interviewed patients observed scarce blood traces on the panty liners within six months.

Essential violations in the form of bloody discharge after oral contraceptives were diagnosed in only 5% of women. Secretion with blood persisted even after the multiple changes of drugs. Therefore, women had to give up the pills and undergo a medical examination.

Duration of adaptation to the oral contraceptives increases due to the following factors:

Causes of this symptom

During each menstruation cycle, the body produces certain amount of various sex hormones, whose doses are responsible for various processes (ovulation, period, etc.) During the use of oral contraceptives, the amount of synthetic hormonal components may be insufficient to overlap the natural content of estrogen and gestagen. Therefore, the body needs several months to get used to such doses. During the adaptation period, the endometrium is partially rejected, which causes smearing discharge during the use of hormonal contraceptives.

There are other reasons for the presence of blood in vaginal fluid, which should be considered according to:

Effect of the cycle time

If it’s been over three months since the beginning of the course, and specific period of monthly cycle is marked by discharge, you shouldn’t immediately suspect the pathology. Minor bleeding can be caused by the features of a hormonal background or the pills themselves.

If you made a break after the blister (21 pills) or finished to use placebo (28 pills in the plate), uterine cleaning is acceptable throughout two or three days. The remaining blood clots after period come out, and turn into the smearing discharge after period.

Moreover, dark-brown discharge after period is caused by too low estrogen dose, which (unlike progesterone), stops the rejection of uterine mucosa. You should choose another drug (but only after consulting the doctor). Taking the other oral contraceptives by your own choice is impossible.

If you use contraceptives, brown discharge in the middle of the cycle, can be caused by the following factors:

During the use of oral contraceptives (“mini-pili”), the egg develops and leaves the follicular sac, causing small amount of blood in the cervical fluid.

The most likely cause of blood secretions before period (after the use of modern means of contraception) is a lack of gestagen. It is also impossible to exclude pregnancy, if the order of treatment was violated or if you missed a day (bloody secretion on the 6–12 day after ovulation).

In some cases, women observe brown discharge instead of period during the use of oral contraceptives. After ovulation, the concentration of natural progesterone grows, preparing the body for the expected menstrual bleeding. When the hormone lacks, endometrium is not rejected in time, causing the delay. However, if you take Yaz or other micro-dose contraceptives, you may observe pseudo-menstruation instead of normal period. In the most advanced cases, menstruation cycle breaks, which leads to the absence of monthly bleeds. Follow the link to read about the smearing discharge after the use of Yaz.

Follow the link to read about the other causes of brown smearing discharge instead of period.

Sometimes, girls who use contraceptives to prevent the unwanted menstruations can observe spotting during the use of birth control pills. In this case, you shouldn’t take a break before starting the new package of pills. In most cases, period doesn’t start (however, you may note the spotting). It is a bit larger, but doesn’t have any sign of bleeding. You can tell this by the state of health and pad. Bleeding may be so strong that the hygienic product becomes unusable within an hour; you may feel weakness and dizziness. This is an express reference to pathology or hormone disorder.

If the adaptation doesn’t stop

The cause of prolonged smear during the use of oral contraceptives can be the violation of rules of use of contraceptives or choice of wrong medications. This explains the side effects. Oral contraceptives are considered safe for women’s health, while the negative reaction in the form of blood secretion is caused by the lack of one or another hormone.

This situation is clearly visible on the example of certain stage of course:

Discharge lasting for several months after the withdrawal of contraceptives is acceptable. Everything depends on the ability of the female body to restore its own hormonal background. However, bleeding must not be systematic. Otherwise, you can’t do without medical examination.

Follow the link to read about the menstruation after the withdrawal of oral contraceptives.

Secretion with blood may appear one or two days after end of the course. It reminds of smear and doesn’t cause special discomfort. Sometimes, a woman’s body is more responsive to the withdrawal of oral contraceptives; therefore, abundant discharge due to the sharp drop in hormone level is not excluded.

How many months after the use of oral contraceptives does the pseudo-menstruation stop?

In almost 50% of women who decided to stop using contraceptives, smearing vaginal secretion with blood disappears after 10–14 days. Duration of adaptation depends on the following factors:

If you decided to give up oral contraceptives, you should be aware that there will be no abundant menstruation in the first few months. The monthly bleeding will intensify, until the situation normalizes. Presence of scare brown discharge instead of period (in case of negative pregnancy test) is normal.

After the withdrawal of oral contraceptives, smearing discharge is a normal phenomenon (as well as a minor delay). It can be caused by the following processes in the body:

as long as these processes last, menstruation cycle will not be the same.

You should raise the alarm, if the period is absent for a few months, and your general condition deteriorated.

The risk of abrupt termination

You shouldn’t abruptly stop the treatment with contraceptives. Otherwise, serious health consequences are inevitable. Usually, women note a longer recovery period with smearing discharge instead of period. However, the most dangerous consequence of abrupt termination of course is uterine bleeding that requires immediate hospitalization. Therefore, doctors recommend taking all pills from the package. The only exception are the following diseases:

Therefore, if you want to give up oral contraceptives, you should consult the doctor so that he/she can choose the optimal scheme of dose reduction based on specific drug (Silhouette and others). That’s the only way to avoid the withdrawal syndrome with unpleasant side effects.

Causes of massive hemorrhage during the use of oral contraceptives

Excessive bleeding during the use of oral contraceptives can be caused by the following factors:

Most women complain of brown discharge during the use of birth control pills. Normally, such secretion has a smearing nature and darker shade than the common period. Pink or light-red discharge is acceptable, when there is more natural mucus then blood owing to the influence of oral contraceptive.

White discharge with a uniform consistency, but without smell and unpleasant sensations must not cause concern. Its emergence is especially important after the withdrawal of oral contraceptives, when the body shows that the recovery period ended. Yellow and beige color of cervical mucus is acceptable (but without itching and burning).

If you note spotting after menstruation during the use of contraceptives, you shouldn’t immediately suspect pathological processes and serious hormonal failures. This is a natural reaction of the body in the first three months. The cause for visiting the hospital is long adaptation period, heavy bleedings and sharp deterioration of the overall health. Bloody, brown and smearing discharge caused by the use of birth control pills.