Bump on the gums: causes and treatment of symptoms 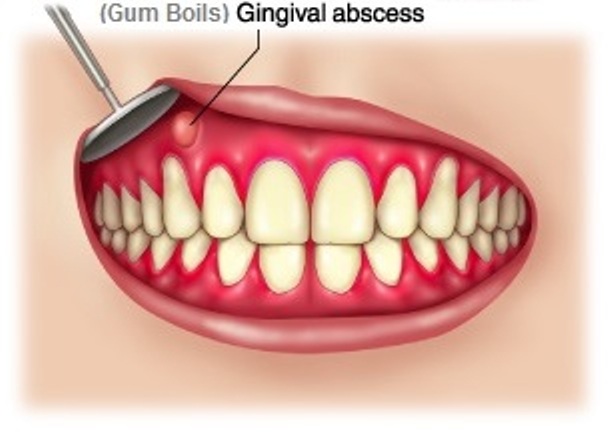 Bump on the gum can be the result of development a serious disease in the oral cavity. Its formation is accompanied by the unpleasant symptoms and can seriously alert a person. It is important not to lose time and start the treatment immediately, as the complications of some diseases include loss of teeth and lesion of adjacent tissues (for example, jaw bone).

Before starting the treatment of bump on the gums, you need to figure out its reason. Usually, it may indicate the development of the following diseases:

Remember that the sooner the specialist determines the cause of bump on the gum below a tooth and prescribes treatment, the better the chances of quick recovery.

Growth of tumors on the gum can be accompanied by the following symptoms:

Besides, the patient can experience high sensitivity of teeth and gums to the external influenced of cold or hot food.

Thorough examination is necessary to define whether the bump on the gum is dangerous and choose the right methods of its treatment. Following methods are used for diagnostics:

Along with this, you can be prescribed a full blood panel, whose results are used to determine the necessity of using antibiotics. To find out the group of microorganisms that provoked the disease, the doctor recommend doing bacterial swab test.

As a part of conventional treatment, the doctors use surgical methods of bump removal and drug therapy. In practice, these methods are usually used in combination.

Removal of the bump on the gum by means of surgery

Operative treatment is used when it is impossible to get rid of bump with the help of drugs. Surgical intervention is made with a mandatory use of analgesics. The type of disease that caused bump on the gum above a tooth will determine the progress of the whole operation. For example, in case of fibroma, the doctor completely excises the neoplasm, while in case of gumboil it is necessary to open the swelling and then put the device to drain the pus. If the bump is located on the gum near a sick tooth, the dentist will also fix it (he/she will clean the root canals and make the fillings).

Drug therapy implies the use of drugs able to stop the inflammation, remove the bump on the gums with no pain, disinfect the oral cavity, fight the harmful microorganisms, reduce temperature and remove swelling. White bump on the gum may indicate cancer. In that case, chemotherapy is obligatory.

The use of folk methods can be combined with traditional treatment. Rinses, compresses and ointments are used for the treatment of bump on the gum. To make them, you can use the following components: